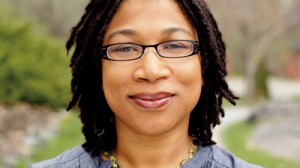 Shana Calixte is the Executive Director of NISA/Northern Initiative for Social Action, a consumer/survivor initiative located in Sudbury, Ontario, where she provides administrative and organizational leadership, as well as advocacy for mental health consumers. At the age of 16, Shana was diagnosed with severe seasonal affective disorder (SAD), and after the birth of her son in 2006, she began to experience postpartum depression. In 2009, she discovered NISA and the consumer/survivor movement.

Witnessing the recovery of others through peer support, Shana believes in the power of mutual aid to challenge as well as strengthen an ailing mental health system. She also believes in the need for social justice to be at the forefront of every movement for change, and therefore speaks often about the need to include a health equity lens into peer support work and organizing.

Shana also works in the Department of Women’s Studies, Thorneloe at Laurentian University, teaching courses on Girl Cultures, Mothering and Reproduction, and Sexuality Studies. Shana is completing her PhD in Women’s Studies at York University, focusing on the histories of Caribbean Girl Guide movements, and the intersections of girlhood, sexuality, and empire-building within this colonial organization. Her most recent publications include: Transnationalizing Girlhood Studies: Girlhood and Guiding as Imperial Practice (SUNY Press: forthcoming 2013); Seven Generations – Mothering, Indigeneity and Hip-Hop: A conversation with Lindsay “Eekwol” Knight (Demeter Press: 2012); Marginality in the Mamasphere: Queers Racializing the Family Tree (Demeter Press: 2009). She is currently working on a project entitled “Collaborative Partnerships with Consumers and the Emerging Role of the Peer Support Worker” in conjunction with Health Sciences North, Sudbury. In 2013, Shana was honoured with the Jack Layton Leadership Award at the Sudbury Social Justice Awards for leading and encouraging others to do their part to build a more equal society.